USE THE INFORMATION PROVIDED BELOW TO REACH US OR LEAVE US A MESSAGE USING CONTACT FORM. 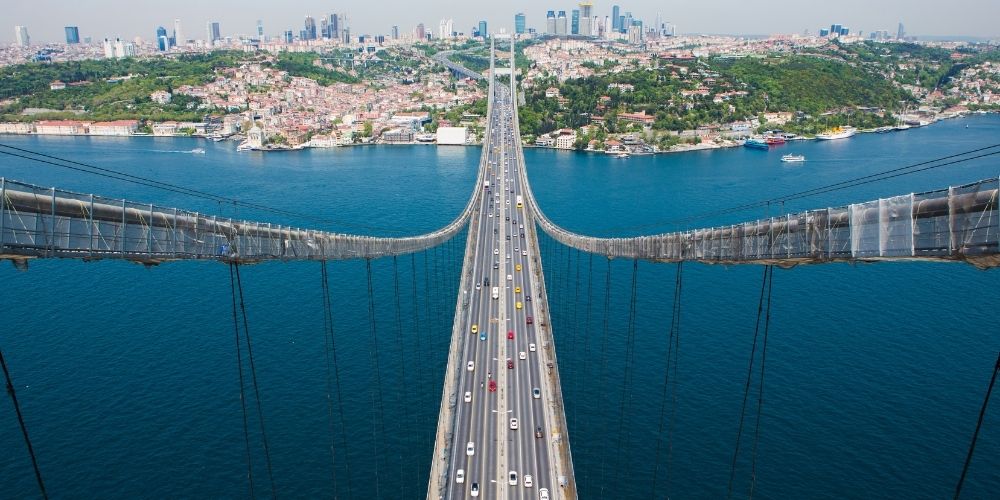 One of the most significant attributes of Istanbul is its placement between two continents with a strait separating the two parts, so its quite normal that the city should have many bridges linking between its two sides. The bridges of Istanbul are more than just a mean of transportation and access from one continent to another, these days the bridges represent an attraction in their own representing a symbol of the charm and beauty of Istanbul.

Here are the bridges over the Bosphorus strait…

The Bosphorus Bridge known officially as the 15 July Martyrs Bridge is a suspension bridge spanning the Bosphorus strait (Turkish: Boğaziçi) in Istanbul, Turkey, thus connecting Europe and Asia. The bridge extends between Ortaköy (in Europe) and Beylerbeyi (in Asia).

Every October, the annual Intercontinental Istanbul Eurasia Marathon crosses the bridge on its way from Asia to Europe. During the marathon, the bridge is closed to vehicular traffic.

In October, visitors participate in the 'fun run' and cross the bridge on foot. Many take picnics to enjoy the view.

The bridge is named after the 15th-century Ottoman Sultan Mehmed the Conqueror, who conquered the Byzantine capital, Constantinople (Istanbul), in 1453. It carries the European route E80 (TEM Highway), Asian Highway 1, Asian Highway 5 and Otoyol 2 highways.

The bridge is situated between İstanbul Hisarüstü (European side) and Kavacık (Asian side). It is a gravity-anchored suspension bridge with steel pylons and vertical hangers. It is 1,510 m long with a deck width of 39 m. The distance between the towers (main span) is 1,090 m and their height over road level is 105 m. The clearance of the bridge from sea level is 64 m.

The Yavuz Sultan Selim Bridge is a bridge for rail and motor vehicle transit over the Bosphorus strait, to the north of two existing suspension bridges in Istanbul, Turkey. It was initially named the Third Bosphorus Bridge. The bridge is located near the Black Sea entrance of the Bosphorus strait, between Garipçe in Sarıyer on the European side and Poyrazköy in Beykoz on the Asian side.